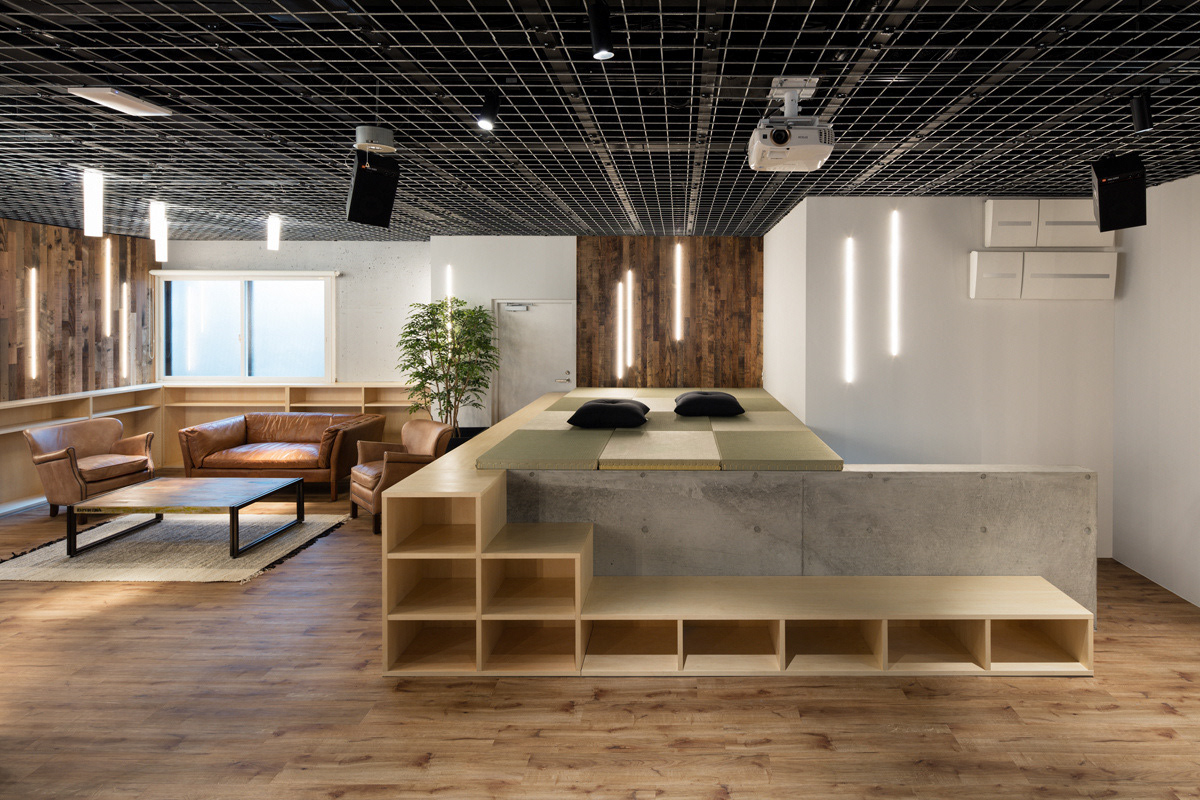 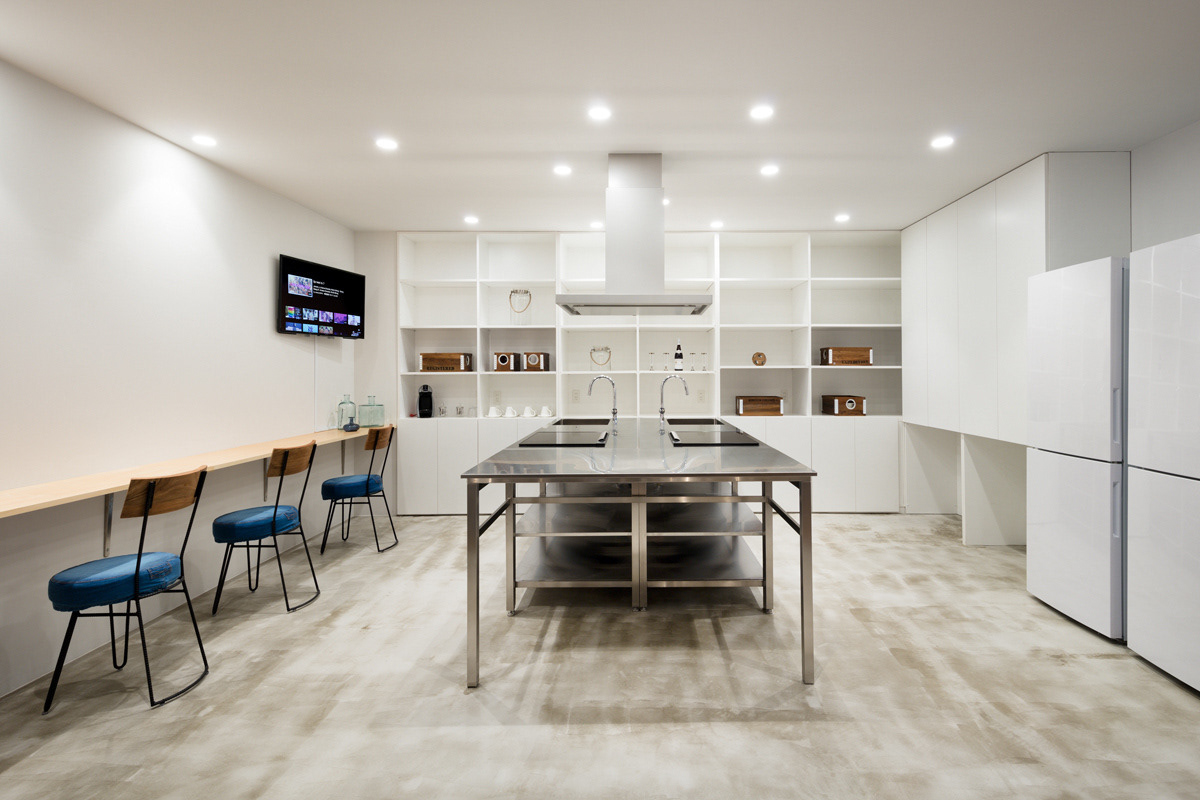 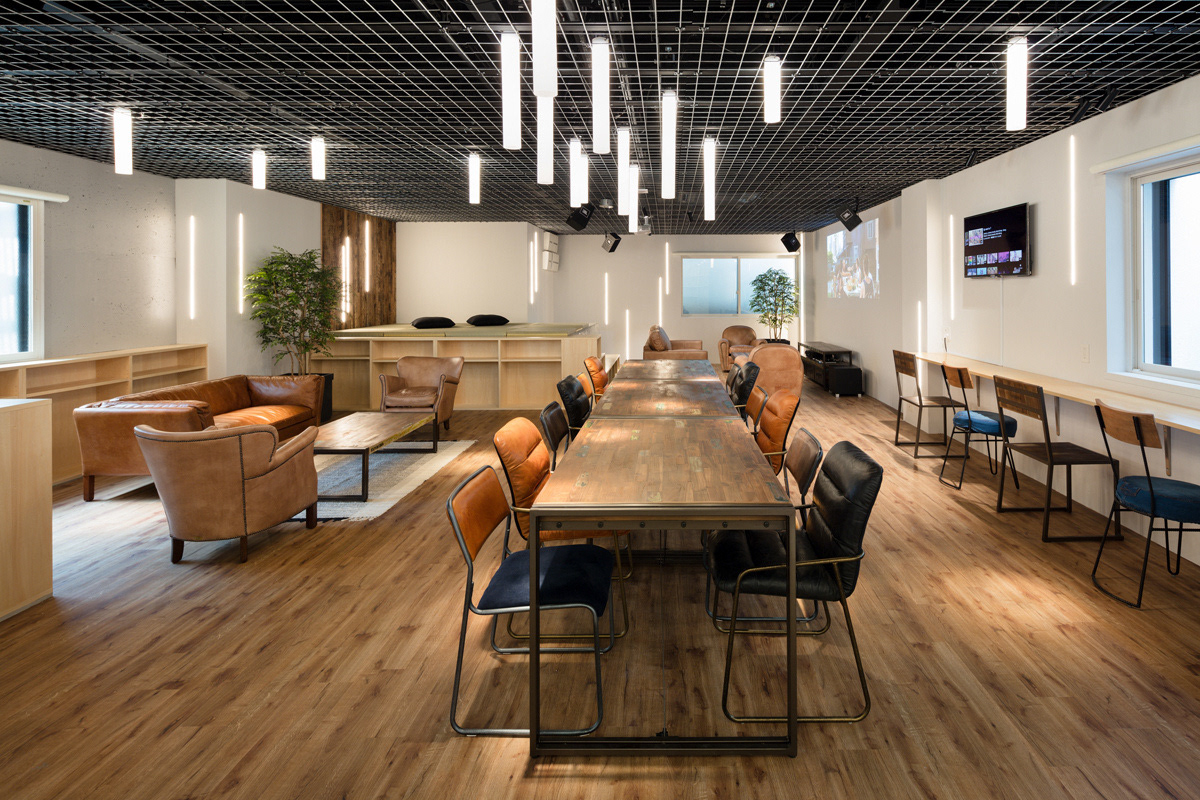 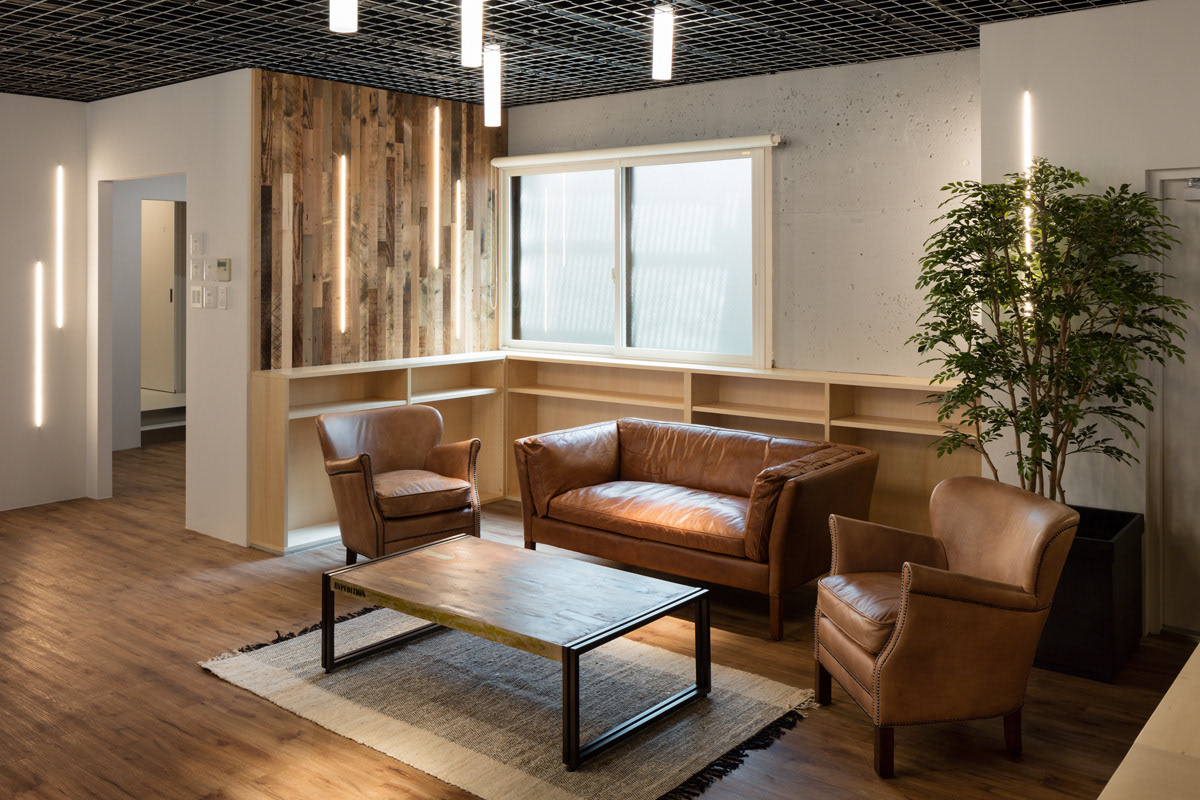 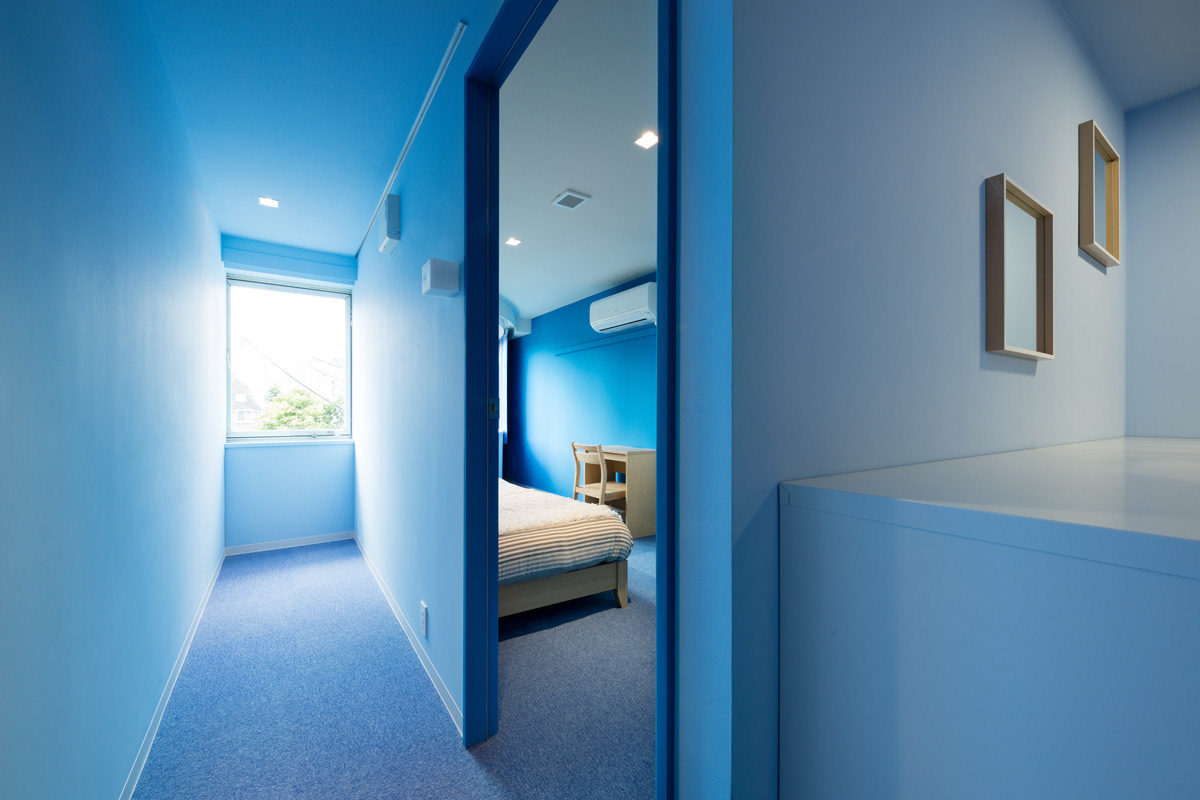 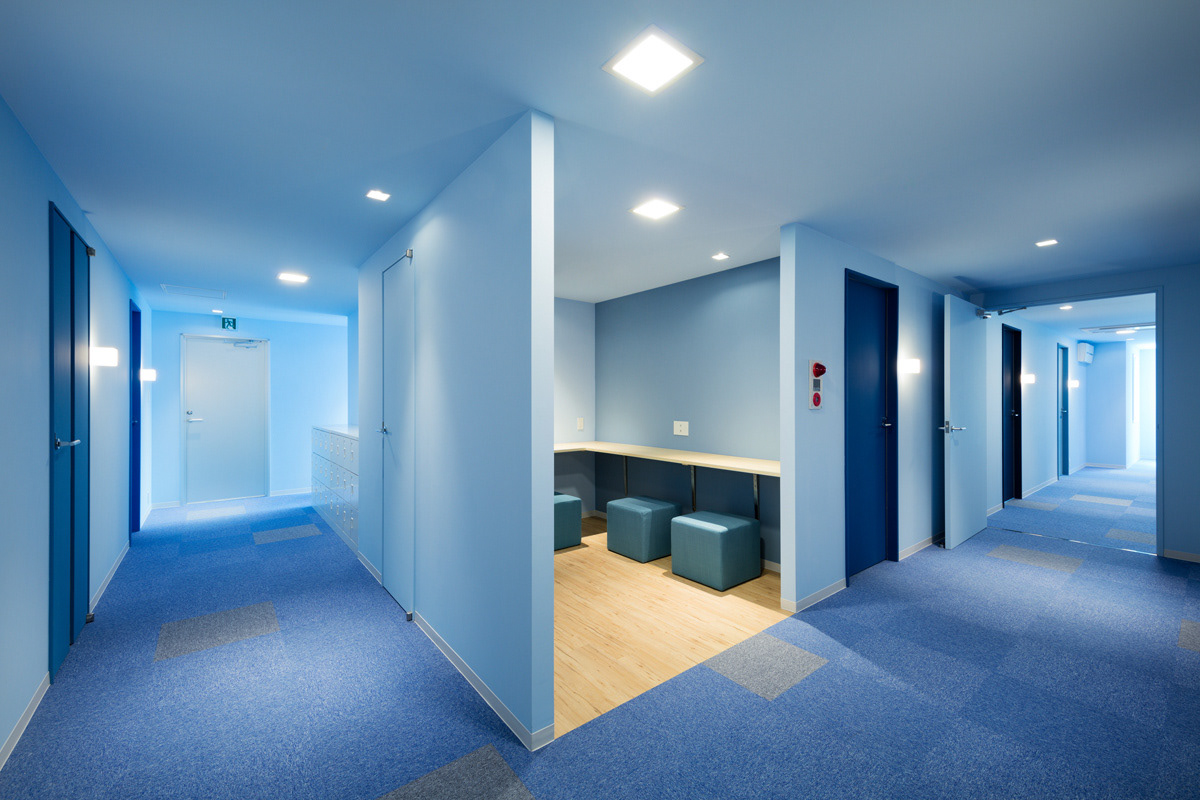 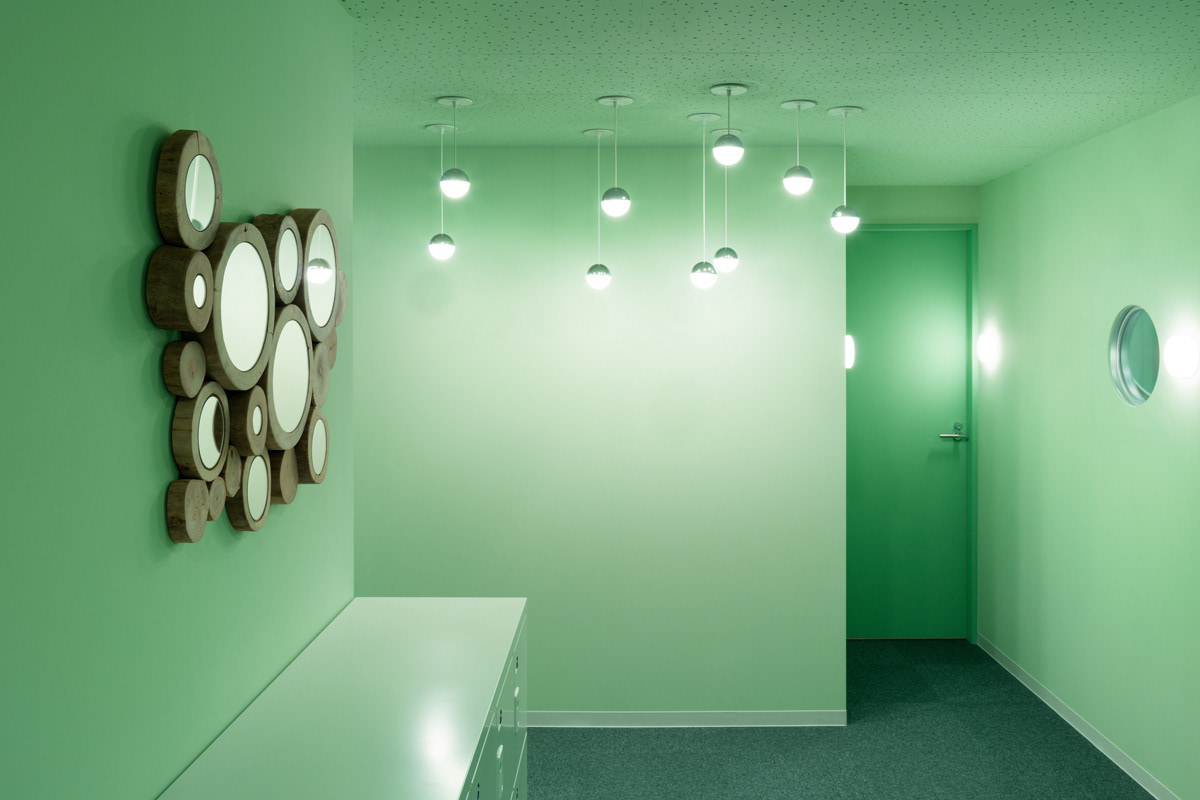 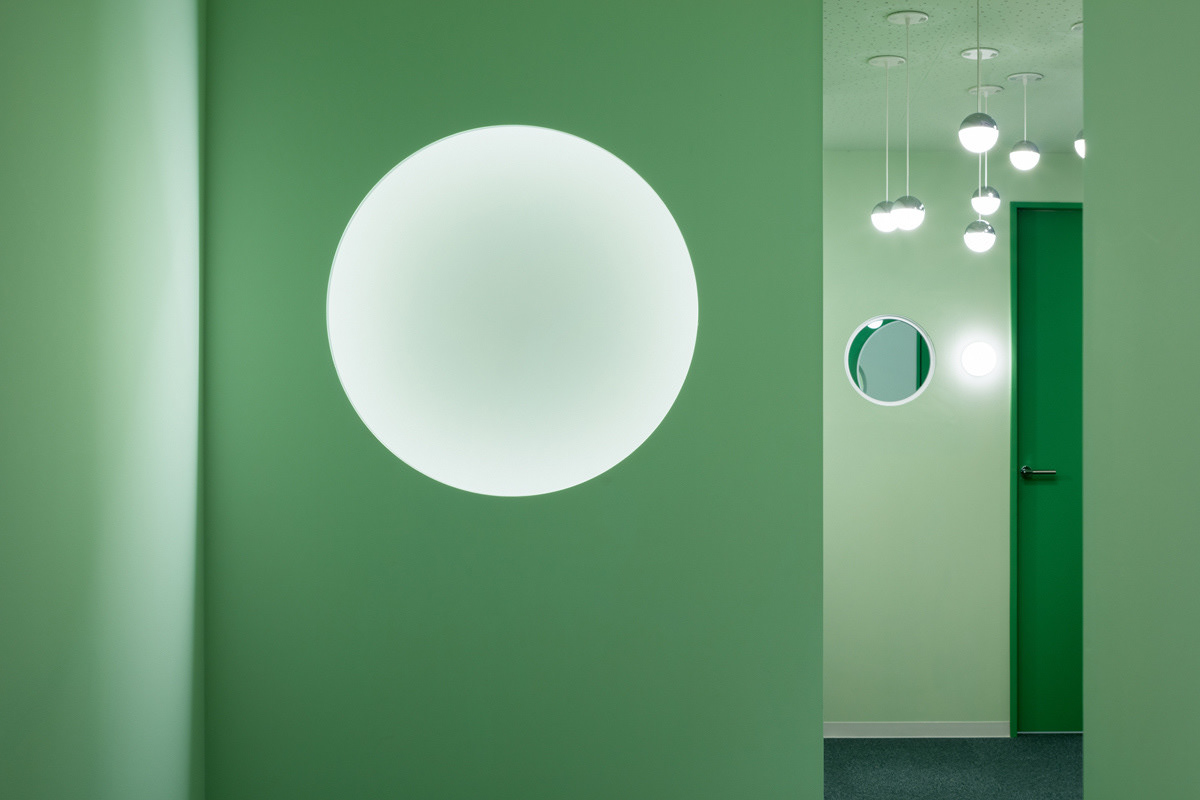 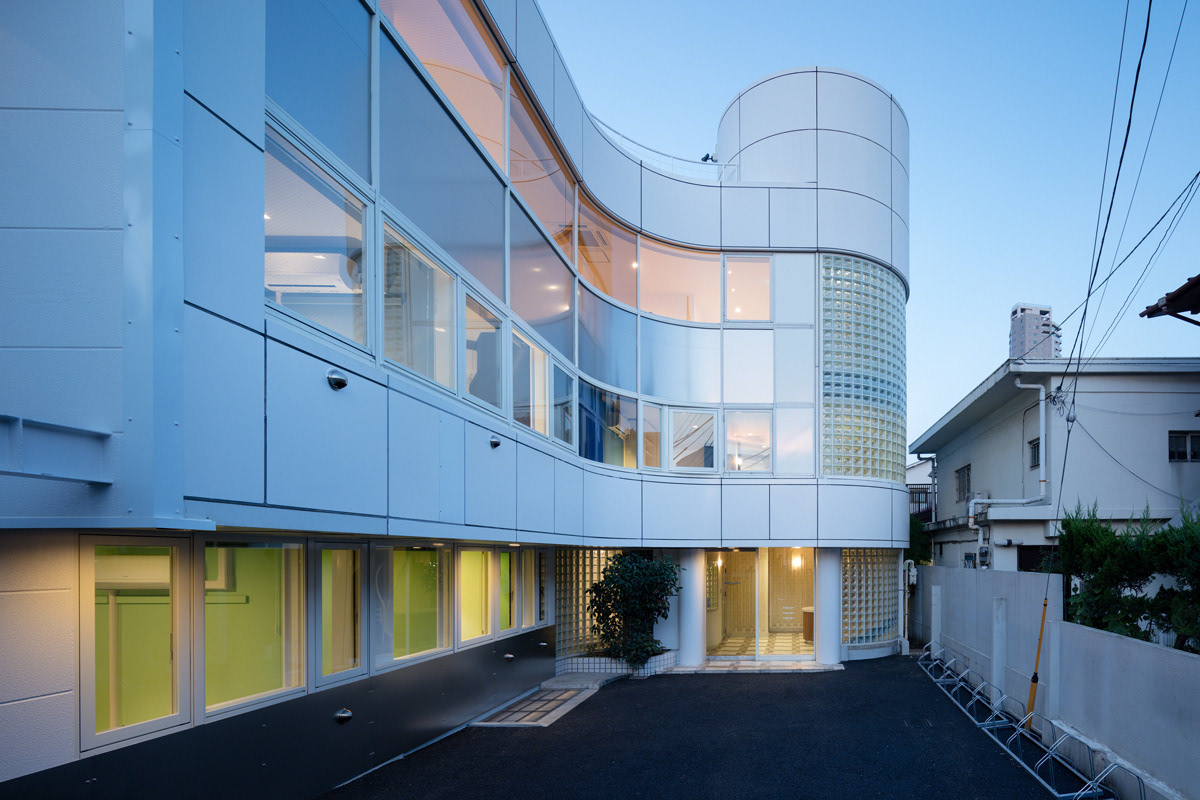 所在地:東京都新宿区若松町
延床面積: 760.04m2
完成:2016年10月
階数:地上３階建地下２階建
受賞
アイコニック賞 2017,Winner
ドイツデザイン賞 2018, Winner
The American Architecture Awards 2017, Honorable Mention
International Design Awards 2017, Honorable Mention
In recent years, the conversion of older buildings into newer ones in an ecological way to reuse the construction resources has been a popular topic and attracted lots of attention in Japan. Due to earthquakes, recovering the older structures at times holds a risk, however, for this project it has been decided to convert the once used office facility into a share-house structure. After assessing the twenty-year-old building materials of the structure, and confirming that they were in a stable condition, the decision was made to preserve the unique glass facade of the old building.  The building is located in the Wakamatsucho area in Shinjuku district, an easily accessible site through different methods of transportation. From this area, it is easy to reach any part of the city, as it is surrounded by quiet roads filled with residential structures along the way. In Japan the concept of a ‘share-house' is not found to be popular: similar to a dormitory, it consists of private single rooms and public multi-functional spaces like the lounge, kitchen, dining and sanitary room areas — however, these spaces are not reserved for students, but for working young men and women. It is no surprise that share-houses have begun to gain popularity in Tokyo, one of the largest megalopolises, which is also expensive and overpopulated. Converting a building, in comparison to designing a new structure, is a much more challenging project. It may seem easier at a glance, as the framework is already there — however with the structure there are more limitations and regulations, in other words, there is less flexibility in alterations. For instance, some of the challenges that have arisen included the pre-planning of the renovation of the structure: the original design plan drawings of the building did not align with the structure in reality. The concept behind the project, along with converting the office building into a dwelling, was to convert “an object into an idea.” Taking into consideration the client’s wishes, the project was designed to be something more than a simple share-house, something more than a place where one just sleeps — but rather make it a social space, where new connections and meetings could be made. The project was built on a question: “What will happen if we gather people with similar tastes, and what kind of result would it lead to?” — the aim of the project was to reflect this concept in the design of the building. The building is composed of a four-storey building with one basement floor. Each floor has an individual design based on a theme of basic shapes of colours. The interior wall’s vivid colours are visible from the exterior of the building through the windows. The facade, uniquely designed in a curve with horizontal stripes of stainless steel, projects the surrounding environment through the reflection of the light. When looking at the facade, different colours are visible. The reason for this is that each floor of the building follows a different theme, each with its own simple yet individual story. The first floor is dominated by the green colour, which is meant to resemble the close connection to the natural environment. The second floor is painted in blue, to show the nearness of the sky. However, colours are not the only focus of the design. A strong emphasis is made on basic geometric shapes, which may be found in the shapes of furniture, lighting, floor finishes, and other interior elements. There are also several rooms with pure white walls. The wide collection of colours and shapes creates a diverse experience of spaces within this building, which in turn gives a broader and richer range of choice for the residents’ use, based on their preferences. In contrast to small single-room apartments offered in the centre of Tokyo, a share-house provides its residents with many spacious shared rooms: a large kitchen island, well equipped sanitary rooms, and leisure areas. When designing these spaces, the main focus of the project was the comfort of the residents. By determining the use of lighting, the lounge spaces have been divided into separate zones. Those which are brighter encourage residents to socialise with each other, while those with less lighting are designed to provide a more private atmosphere.
Collaboration with Rieko Okumura
Lead Architects: Ryuichi Sasaki/Sasaki Architecture, Rieko Okumura/Atelier O
Architecture Ryuichi Sasaki, Rieko Okumura,Gen Sakaguchi, Michal Rogozinski,Anna Kwapien/SASAKI ARCHITECTURE
Producer: Hidetaka Gonai/Modelia Co.,LTD
Sign/Graphic:Yoshinari Takahashi/ YTRO DESIGN INSTITUTE
Lighting Design:Natsuha Kameoka/Lighting Sou
Contractor:Magome Construction Company
Management: Kiyoshi Yonemitsu/Alpha Management and Partners. Co.,LTD
Client:Nobumitsu Ohashi/Shukou Kensetsu Co.,LTD.
Photo:Takumi Ota Photography Co., Ltd.
Location: Wakamatsucho, Shinjuku-ku, Tokyo, Japan
Area : 760.04 m2
Completed in October 2016